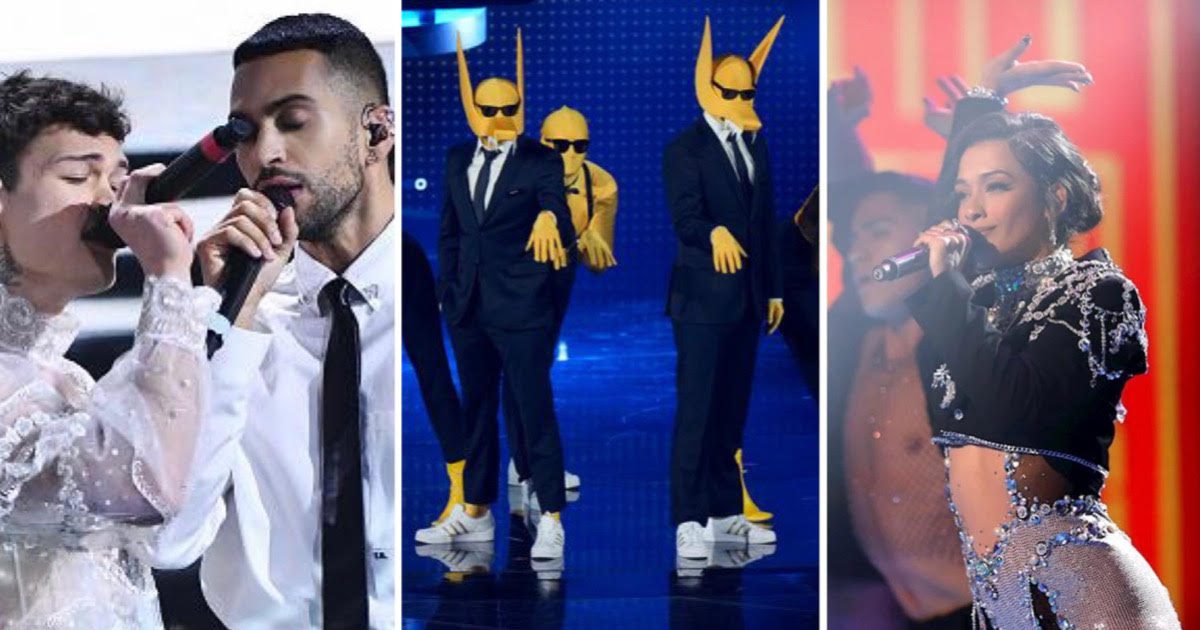 Every year when Eurovision sets its sights again, there are a handful of songs in the set of 40 that I will carry with me for the rest of my life – for better or for worse. For the best side of the spectrum, we have songs that I will never be able to live without again – I’m talking about Euphoria by Loreen, Fuego by Eleni Foureira. And then we have songs that I would gladly banish to the fiery pits of hell. I would name some of them, but I can’t, because they are banned. They are dead to me now. Here’s a roundup of the worst and best songs from Eurovision 2022 – enjoy the worst while you can, because after Saturday’s final… They will cease to exist.

Give That Wolf a Banana by Subwoofer

Ooooh, look how quirky Norway is guys! They call random people Keith, compliment teeth, and wear weird puppy play masks! I love a wacky Eurovision entrance and lyrics (one of my favorites from last year had the lyrics “drop eyelashes on the floor”, which is the weirdest visual), but not when he maddeningly tries to be funny and different. Stop trying to be a meme and go viral! I see through ! A decently produced song ruined by bitter annoyance.

Germany sent its Aldi Pete Davidson to Eurovision 2022, with a landscape of hell loaded with clichés sung in cursive. When he starts rapping, I just wish for the freezing liberation of death.

I reluctantly have to tell you that this one made the finale, despite being manic, frenzied horror. Our Moldavian queen of ass notes from last year came out the door and a bunch of your dads are singing about a train. Fantastic.

Look, I’m sure they have some pretty girls and they sound good. I’m filing them here because I’m sick to death of three women with guitars coming out and everyone saying HAIM. They sound *nothing* like HAIM. At all. And maybe if they did, they’d be better off! Come on Iceland, after the last two years we need better.

The Boys Cry by Marius Bear

Exactly, Marius Bear. The boys are crying. And we do it after having to endure a hearing of it.

Lock Me Up by Circus Mircus

Have you ever seen the movie House of 1000 Corpses? Georgia’s entry into the canon of Eurovision 2022 songs strongly reminds me of Rob Zombie’s controversial film, only even more unsettling and menacing. Clown visuals are too much.

I love disco music and would hereby like to decree that it must be guarded and preserved from the hands of five dangerously uncharismatic Slovenian white men. End of.

If you call yourself a name as obnoxious as Intelligent Music Project, I’m going to need the song to be better than a bunch of budding rock dads doing their best to emulate Jon Bon Jovi. Terrible.

The fact that Ukraine is able to send people to compete in the midst of the current horrible climate is amazing, and it’s clear to see why Stefania is such a favorite to win when it’s a celebration shameless of Ukrainian culture and passion. It’s not as good as their 2021 entry, the iconic Shum, but it’s a solid entry that will no doubt do well.

Hold Me Closer by Cornelia Jakobs

Does Sweden ever fall short when it comes to Eurovision songs, no, it doesn’t – and 2022 continues its prowess. A really solid ballad, Cornelia Jakobs sounds great and after the lukewarm ballad slog from the first semi, it proves you can make a good Eurovision ballad that still stands out among bangers.

Brividi by Mahmood and Blanco

Mahmood should have won for Italy in 2019 – Soldi is one of the coolest, slickest Eurovision songs in living memory – but he’s back for 2022. This time he’s got the help de Blanco on a ballad that is a slightly different rhythm to Soldi but in no way less gripping. He’s just…classy. There is something magical that Mahmood brings that elevates the proceedings. And by the way, he’s gorgeous.

Dying Together by Amanda Tenfjord

Born in Norway but also raised in Greece, Greek-Norwegian Amanda went to school with pop icon Sigrid and they were in the same class! Die Together is nothing short of spectacular – a vocoder layered intro that swirls up to a powerful chorus. Chic, soulful, and effortlessly sung – in a fair world, it’ll comfortably top 10.

Lights out by We Are Domi

Pure and unapologetic dance pop magic from the Czech Republic – Lights Off has a hard-hitting beat with which you can imagine Rita Ora dominating the UK charts. Big vocals, big beats and a feeling of euphoria. One of the best Eurovision Songs of 2022 without a doubt.

Alright, I’ll say it: That’s Rich is the best song in the contest. What Brooke has served us here from Ireland is pop magic. Bratty, rambunctious, campy, baby voice with the perfect amount of fries. Look how much fun she is having in the thumbnail! My queen. My winner. I love how she sings “sick of you now” like “sickeryanow” in a millisecond. Pop superstar behavior.

Halo by Lumix and Pia Maria

One of the biggest casualties of Eurovision 2022 is that Halo isn’t one of the songs in the final. The Austrian dance banger is a ball blast against the wall that deserved its spot on some of the HELL we’re going to have to endure in its place. Simple but a high BPM explosion!

Eat Your Salad by Citi Zēni

The biggest casualty of Eurovision 2022 is that a banger that opens with “Instead of meat, I eat vegetables and pussy” is not among the songs in the finale. Eat Your Salad is clever in all the good ways that Give That Wolf a Banana isn’t. It has an Uptown Funk-esque musicality with a plant-based message. And Citi Zēni is charming as hell, real showmen in fun costumes like an X-rated Latvian The Wiggles. JUSTICE TO EAT YOUR SALAD

Listen to all Eurovision 2022 songs on this Spotify playlist here.

Related stories recommended by this writer: