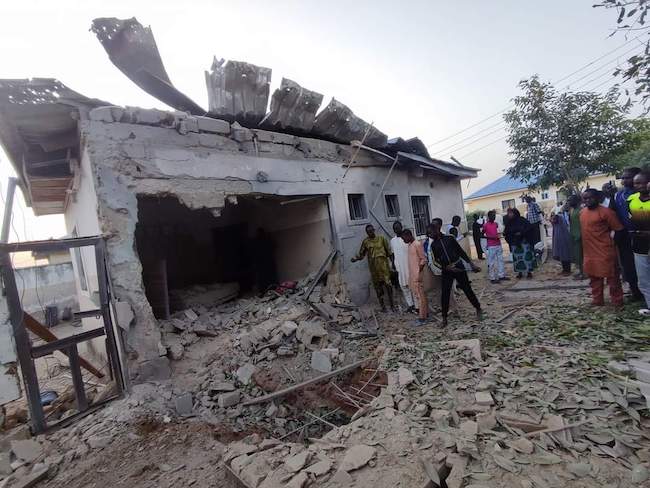 There was palpable fear among residents of Maiduguri on Saturday after news emerged that terrorists were firing bombs from the outskirts of the old Ngomari airport, not far from Borno State University.

The bombs are said to have landed on several nearby houses, causing extensive damage that is difficult to quantify at the time of writing.

Borno State Governor Babagana Zulum also attended the scene on Saturday morning, calling on the military to wake up to their homework just as he said he was setting up a committee to assess damage.

State Police Commissioner (PC) Abdul Umar revealed that terrorists had fired the bombs from the outskirts of the old Ngomari airport, behind Borno State University, adding that the mortars had landed in different places in the city and caused minor damage.

The CP said the first bomb landed inside a house belonging to one Ibrahim Abba-Fori, setting a Honda Civic car on fire while another destroyed a room in Alhaji Bukar Modu-Kullima’s house and injured the 6 month old baby, Fatima Alhaji-Bukar. .

â€œAnother landed in Gambari Njimtilo Ward near Ahmed Yahaya’s house, where the house fence was destroyed. The last explosive landed on a farm in the village of Shuwarin Atom, â€he said.

Umar said the 6-month-old victim was treated for minor injuries at the state-of-the-art Umaru Shehu Hospital and was discharged.

No life was lost in the attack, the CP said, adding that more police and military personnel had been deployed to the outskirts of Maiduguri for surveillance and patrols.

A military spokesperson did not respond to calls or texts asking for comment.

However, in an interview with the Sunday Tribune, residents of the 1000 Housing Estate said the incident happened around 6 a.m. local time on Saturday and the rockets fell on a house but no one was inside.

According to a resident, Malam Bukar, whose house was hit by rockets: â€œI came back from the mosque, then I was sleeping, so I heard a very loud explosion noise.

“I was terrified and my wife was crying for help but thank goodness nothing bad happened to her.”

Sunday Tribune concluded that rockets also landed on two houses in the Ngomari airport area but no lives were lost.

An eyewitness, Usman Zanna from Gomari, said: â€œThe explosives landed in our area and we suspect they were thrown by Boko Haram terrorists and we assumed the target was the Hajj transit camp where their former colleagues are detained in the camp.

â€œYou know we are complaining that the former insurgents continue to camp in the city. If you noticed, they tried to attack all the communities where their former colleagues are held. We’ve complained about this for so long, but nobody cares, â€revealed Usman Zanna.

Another source, a member of the air force confirmed that the insurgents tried to infiltrate the town of Maiduguri but were unable to access it due to heightened security, so they decided to launch explosive rockets targeting the pilgrim camp.

â€œSince yesterday (Friday) in the evening, they have tried to enter the town of Maiduguri, but the soldiers have continued to frustrate them with the help of planes from which they were chased.

â€œSo I think they hid in the nearby bushes around town and resorted to throwing explosives at the Hajj camp. But everything is back to normal now, â€the military source concluded.

No bomb explosion at Maiduguri-FAAN airport

The Federal Airports Authority of Nigeria (FAAN) denied the insinuation that there had been an explosion at Maiduguri airport.

FAAN Director General of Corporate Affairs Henrietta Yakubu on Saturday called the report false, insisting that there had been no explosion or attack at the airport.

According to Yakubu: â€œThe Federal Airports Authority of Nigeria (FAAN) hereby wishes to inform passengers and the general public that there has been no explosion or trespassing at Maiduguri Airport. The airport was not targeted and is not subject to any attack.

In a statement, the director of public relations of the army, Brigadier General Onyema Nwachukwu, said that “the sound of the explosions in the community of Gomari and in the 1000 housing estate in Maiduguri was heard in the early hours of Saturday with shots fired at these communities by Boko Haram / ISWAP criminals “.

He added that â€œthe incident caused some level of damage and apprehension in residential areas. Although no life was lost, unfortunately, a minor injury was sustained.

Nwachukwu said ground troops in conjunction with the OPHK air component reacted quickly and dominated the area with ground and air bans that successfully neutralized threats and the terrorists’ attempted infiltration.

He urged the general public not to panic as troops are on the ground and aggressively dominate the city to effectively eliminate any perceived threat.

YOU MUST NOT MISS THESE TITLES NIGERIAN TRIBUNE

Lagos is the second least livable city in the world for the year 2021. This is according to the most recent annual ranking established by the Economist Intelligence Unit (EIU) …

FACT CHECK: Has UNICEF declared that blocking children’s access to pornography is a human rights violation?

ALLEGATION 1: A Twitter user claims that UNICEF has said that any effort to prevent children from accessing pornography could violate their human rights.