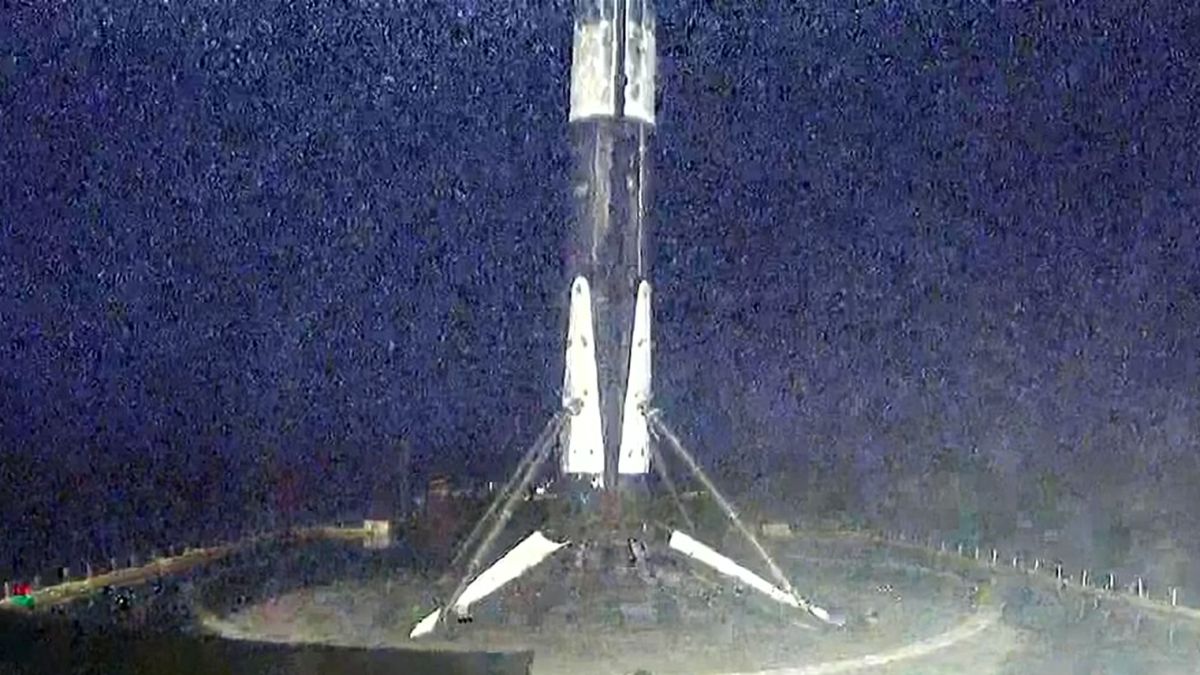 One of SpaceX’s oldest rockets launched on a historic 10th flight, carrying the first stack of Starlink satellites into space in more than two months before landing at sea to crown the mission’s success.

“What a great sight of Falcon 9 as it successfully takes off from pad 4E at Vandenberg Space Force Base, carrying our stack of 51 Starlink satellites into orbit,” SpaceX’s Youmei Zhou said during the launch broadcast.

“The first stage landed on our drone for the 10th time,” Zhou added after the thruster landed, noting that this was the company’s 90th successful landing to date.

The successful liftoff marked the first time SpaceX had launched a batch of operational Starlink satellites on one of its 229-foot-tall (70-meter) Falcon 9 rockets from its California launch facilities. It was also the first dedicated Starlink flight in more than two months, which was a dramatic departure from the regular cadence set earlier this year as SpaceX launched its own satellites almost every week.

About nine minutes after takeoff, the first stage of the rocket returned to Earth, landing on SpaceX’s “Of course, I still love you” drone for a successful 10th landing – the second booster from the first stage of the Falcon 9 to do it. The huge ship, which was previously stationed in Florida, crossed the Panama Canal to support the company’s recovery efforts on the West Coast.

The Vandenberg Space Force base is known for its marine layer, which is a thick veil of fog that covers the area and hinders visibility. The phenomenon was evident during the live broadcast as the rocket was barely visible on the launch pad.

SpaceX’s Starlink mega-constellation was created with one major goal in mind: to provide internet coverage to the world. The company specifically targets users in remote or rural areas who currently have little or no internet connectivity, but users around the world will be able to subscribe to the service, the company said.

At the same time, SpaceX is hoping that Starlink will serve as a vehicle to fund its deep space ambitions, like its Starship program. To this end, the company’s engineers have designed a fleet of flat-panel broadband satellites to fly over the Earth, transmitting Internet coverage to users who can access the service through a compact user terminal.

With Monday’s successful launch, SpaceX placed 1,791 Starlink satellites into orbit (including initial test versions), well above the company’s initial quota of 1,440 satellites. However, the company has official approval for thousands more.

To date, SpaceX has shipped over 100,000 Starlink Internet devices, and the service has been approved to operate in at least 14 different countries, with pending applications in several more.

“With each launch of Starlink, we move closer to connecting the world,” Zhou said during the broadcast of the launch.

SpaceX has taken advantage of its fleet of flight-proven boosters, with today’s flight marking another milestone for the company. The flight is the first of the company’s recently upgraded Starlink Internet satellites, which are now equipped with intra-satellite laser communications.

Typically, SpaceX logs its boosters with fewer miles for paying customers, choosing to reserve the most stolen boosters for its own missions. This way, SpaceX can push each booster to its limits, as the company demonstrates by piloting this particular booster for the 10th time.

The booster used at Monday’s launch, called B1049, is one of SpaceX’s oldest members in its frequent flyer club. The veteran launcher now has 10 launches and landings under his belt as the company continues to push its Falcon 9 rockets to the limit.

This booster made its debut in September 2018 with the launch of a communications satellite, called Telstar 18V for Canada. He then traveled the country to launch a stack of Iridium NEXT satellites before returning to the Cape Canaveral space station where he launched seven Starlink missions.

After trekking across the country from Cape Canaveral to Vandenberg Space Force Base in California, the booster was ready to carry its tenth payload: a full stack of SpaceX’s own Starlink satellites, which were launched on a polar trajectory in order to serve customers in higher latitudes.

This is the 125th flight in total of a Falcon 9 rocket thruster and the 70th revolt of a refurbished aircraft. It is also the first of two different Falcon 9 launches this week.

Perched atop Pad 39A at NASA’s Kennedy Space Center sits another veteran Falcon 9 rocket. If all goes according to plan, Wednesday night this Falcon 9 rocket will carry the first fully civilian crew on a three-day trip around Earth on a mission called Inspiration4.

This mission will include both a used Falcon 9 rocket and a used Dragon spacecraft. Falcon 9 has truly been a workhorse for SpaceX, earning its place in the most stolen rocket currently in production. With the beginnings of the bloated iteration we see today, SpaceX is able to meet its goal of rapid reuse.

To make reuse easier, SpaceX tweaked its main launcher in 2018, adding a few nifty upgrades, including a more robust heat shield system, titanium grille fins, and more powerful engines. This version of Falcon 9, known as Block 5, has allowed SpaceX to launch more rockets than ever before.

When it debuted three years ago, SpaceX CEO and founder Elon Musk told reporters the company expected every Falcon 9 to fly 10 times with little refurbishment between flights, and up to to 100 times before retirement.

SpaceX first reached this milestone with another booster – B1051. This launcher was the first to reach 10 flights and won’t stop anytime soon. According to Musk, 10 thefts is not a hard limit or a magic number. As the company continues to refine its refurbishment process, it will continue to push every Falcon to its breaking point, he said.

Now that the B1049 has also hit the historic 10-flight mark, the company will have more data to continue.

SpaceX had a record-breaking year in 2020, as the company not only launched the most rockets since its inception in 2002, but also launched humans into space from US soil for the first time since the program ended. space shuttle in 2011. The key to its success has been its fleet of flight-proven rockets.

The company has no plans to slow down anytime soon, as it hopes to launch a record 30 rockets in 2021. It is also preparing for the launch of its fourth crewed mission, which will take off on Wednesday evening (September 15), carrying Jared Isaacman, Hayley Arceneaux, Sian Proctor and Chris Sembroski in space for a three-day orbital journey. The Inspiration4 mission is part of a fundraising effort to raise millions for St. Jude Children’s Research Hospital and is expected to launch during a five-hour window that opens at 8:02 p.m. EDT (0002 GMT) .

When the first stage thruster returns to port, it will sail into Long Beach Harbor, marking the third different port that this particular thruster returned to after putting its payload into orbit. (The other two being Port Canaveral and the Port of Los Angeles, where SpaceX had previously based its West Coast operations.)

In addition to recovering the Falcon’s first stage, SpaceX will also recover the payload fairing or the rocket nose cone. The shell-shaped material is designed to protect the payload as it ascends into the atmosphere, and then drops once the rocket reaches a certain altitude. With each half worth an estimated $ 3 million, the company can really cut costs by refurbishing the fairings and piloting them again.

In fact, each of the fairing pieces used in this mission have flown several times already. Equipped with navigation software and parachutes, the fairings will slowly descend into the Pacific Ocean where they will be retrieved by a ship called NRC Quest, one of SpaceX’s salvage ships. Hopefully, they’ll be flying again soon.