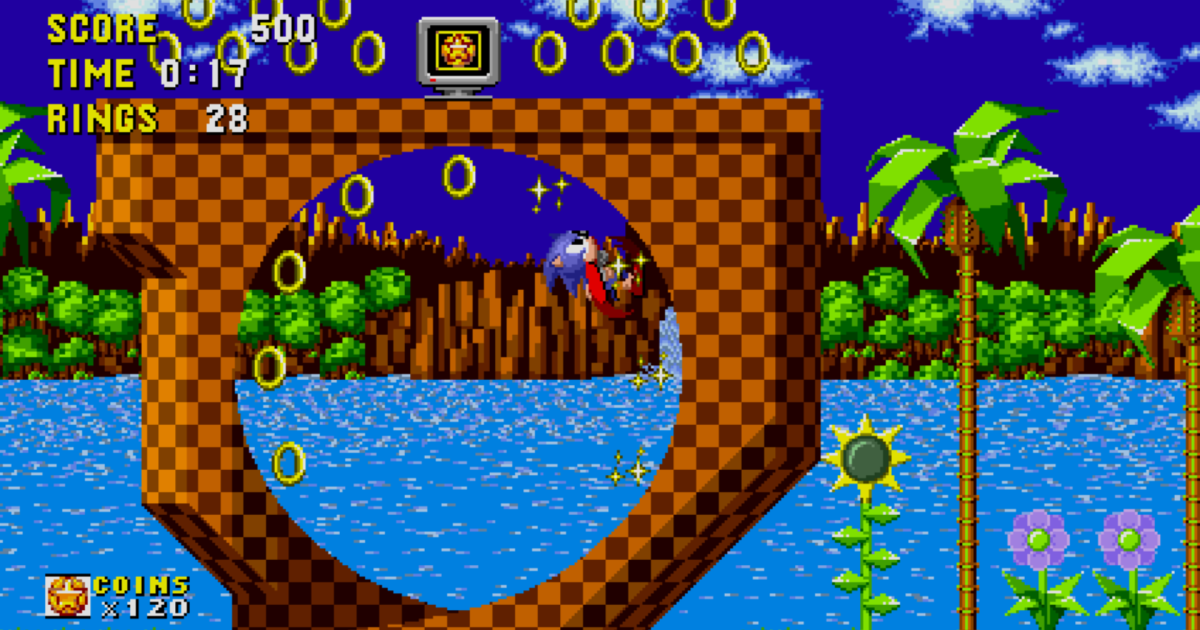 The old version of the games is a pixel-perfect recreation with the old CRT-compatible aspect ratios, while the new versions retain the spirit of the old look with some modern enhancements.

Phil Villarreal: Having grown up as a Nintendo fanboy who took decades grudgingly loving Sonic games, it’s refreshing and alive to experience these games for the first time on a 4K TV.

It had been years since I had played one of the classic “Sonic” games, so I came in with some pretty fresh eyes. The sheer speed and joy that comes with the platform holds up remarkably well. The escalation in difficulty is huge, with the first few levels passing like a breeze before your reflexes are put to the test.

While it was nice to have the classic versions available, I’m all for the new “anniversary mode” overhauls that make the games much smoother. It was a joy to play through the games and collect the artworks and videos to populate the museum. I also enjoyed the long, anime-style cut scenes that introduce the games and connect the levels.

What stood out to you, Sean?

Sean Newgent: You’re talking to a man who played his fair share of the original Sonic the Hedgehog games back in the day. Sonic was a series of games that a much younger, much less critical self devoured; even at one point I enjoyed “Shadow the Hedgehog”.

Going back to those games was a nostalgia hit. I owned a lot of them on that weird collection of CDs I got from a Costco in the very early 2000s and played them to the hilt. The aforementioned cutscenes introducing each game are in that classic Sonic style, reminiscent of the cartoon “Sonic” (most famously for Sonic Sez), as well as “Sonic Underground” back in the heyday of Blue Blurs. These refreshing intros don’t modernize the character designs (notably Amy Rose) and instead stick to classic Sonic in a way that only a studio that loves IP can truly pull off.

And then you come to gaming in glorious high definition, still playing great. Having the ability to choose multiple characters for each game offers ways to reach cheesy levels that weren’t meant to have, say, Tails flying over everything, but which, along with the infinite lives if you avoid classic mode, is a great way to introduce a younger generation who may have discovered Sonic through the latest movies or even new games, a chance to really see where this character is coming from.

Do you think it has enough features for kids to enjoy these three-decade-old games?

Phil Villarreal: I think it’s more accessible not only to children, but also to beginner players of all ages. The ability to play as Tails in all but the first game is a godsend, with the character’s flight ability getting you out of jams Sonic would struggle to get out of.

The developers could have gotten away with a quick and dirty ports build, but they took care of the archival curators to create a package that does justice to the character’s legacy. Unfortunately, many Sonic sequels over the years didn’t have as much reverence for the source material, and that’s what made the franchise something of a joke before its recent revival. The level of quality control at play here is huge.

Those old games somehow feel new again – probably because modern platforms lack the freewheeling speed and cheerful tone that those games encapsulate. I see this package as an essential pickup for those who love classic platforming.

Sean Newgent: With the dirge of all kinds of big budget titles, it feels like the summer of retro revival. And while the studios could just throw their classic games into a cheesy collection, the care and love put into presenting “Sonic Origins” makes it well worth a purchase for fans of the character. For fans, as soon as you start up Green Hill Zone and hear that unforgettable earworm from a soundtrack, you’ll be hooked. The inclusion of a series of challenges that allow you to collect coins to purchase items from the museum shop adds a nice amount of skill-based gameplay for those who can crank up these classics in their sleep.

That said, the game locks certain features behind a DLC paywall, which seems lame for a package that doesn’t necessarily offer anything new, but some of those things that are locked. And add that on top of a $40 price tag – that sounds like a lot of money for what is, for sure, a great collection of games, but I don’t see it being a must-have for anyone except the deadliest-toughest of Sonic fans.

——-
Phil Villarreal is the senior real-time writer for KGUN 9. He is also a digital producer and host of “Phil on Film” seen weekly on Good Morning Tucson, Phil joined KGUN after 17 years with the Arizona Daily Star. He is married and the father of four children. Share your story ideas and important issues with Phil via email [email protected] or by connecting to Facebook, instagramand Twitter.

——-
Sean Newgent is a producer for KGUN 9. Sean graduated from Illinois State University with a degree in broadcast journalism. While at ISU, Sean wrote film reviews for the newspaper, anchored and produced student newscasts, and was nominated for a student Emmy for broadcast film reviews. Share your story ideas and important issues with Sean via email [email protected] or by logging on to Twitter.

With and for GenZ; Viral Fission talks about enriching experiences