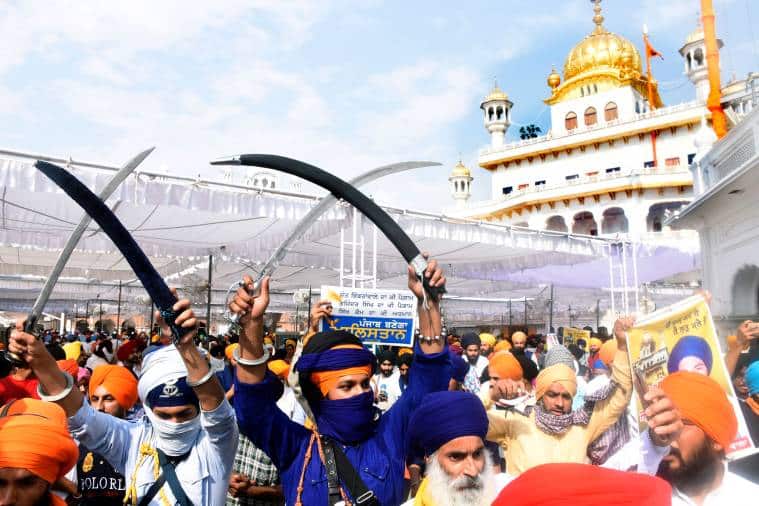 Ahead of the anniversary of Operation Blue Star on June 6, Sikh bodies questioned the need for heavy security measures in the city.

In a press note released on Saturday, Chairman of the Shiromani Gurudwara Parbhandak (SGPC) Committee, Harjinder Singh Dhami, “condemned the government for turning the city of Amritsar into a police cantonment for the commemoration of the week of the Holocaust of June 1984”.

“By doing so, the government is creating an atmosphere of fear as this day is very serious and painful for the Sikh Qaum (community). Every year on the day of Ghallughara, the Qaum gathers to commemorate its martyrs and therefore the government should not present this occasion as scary,” said Harjinder Singh.

Dal Khalsa activists also campaigned while seeking to support a “bandh”. They were distributing pamphlets and unfurling banners in public places to publicize their planned Azadi march event on the evening of June 5 and a bandh on June 6.

The best of Express Premium

“In the name of maintaining public order during Ghallughara week, the police were spreading terror by targeting young Sikhs at police nakas. The government and the police should desist from such terrorist tactics,” Dal Khalsa leader Kanwar Pal Singh said. Kanwar claimed his Twitter account was withheld following the Indian government’s complaint ahead of the anniversary and called it an attack on freedom of speech and his right to independent thought.

Punjab Chief Minister Bhagwant Mann on Saturday reviewed the law and order situation in the state ahead of the anniversary of Operation Bluestar on June 6 and said police had been put on standby. alert to keep the peace.

Operation Blue Star was carried out by the Indian Army in June 1984 to flush out militants hiding in the Golden Temple complex in Amritsar.

Chairing a meeting with senior police and civil administration officers, Mann asked them to put in place elaborate security arrangements by June 6 across the state. The Chief Minister said no one should be allowed to disturb the hard-won peace of the state at any cost.

Stating that his government is committed to making Punjab a peaceful and forward-thinking state in the country, he said anyone who tries to disturb the peace will be dealt with severely. Some forces hostile to the progress and prosperity of the state are constantly trying to derail peace in the state. But the AAP government will not allow such a nefarious move to succeed, Mann said.

The Punjab police have been placed on high alert and central paramilitary forces have been deployed to help them maintain peace in the state, the chief minister said. Urging Punjabis to uphold the ethos of peace, communal harmony and brotherhood in the state, Mann urged them “to teach the anti-Punjab forces a lesson by foiling all their conspiracies to bring Punjab back in dark days”.

An Amritsar police spokesman said it is the first time since 2019 that paramilitary forces have been deployed in the city ahead of the anniversary. A clash between Sikh militants and the SGPC task force was observed in 2014 at the premises of the Golden Temple after the anniversary ceremony. At a press conference on Saturday, Amritsar Police Commissioner Arun Pal Singh said people were happy with the increased security because they wanted their safety. “I haven’t come across any complaints that anyone is being harassed,” he said.