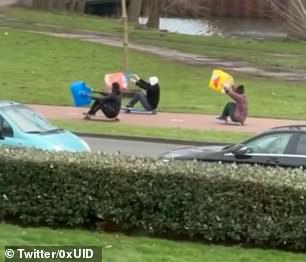 And the IKEA bag wins! Skateboard riders make the most of Storm Eunice’s gales by using shopping bags to propel them through a park in the Netherlands

By Olivia Devereux-evans for Mailonline

This is the fun time when people used plastic bags for a race fueled by gusts of wind.

Fueled by strong winds, determination and spirit, the three thrill-seekers are propelled onto the sidewalk of a park.

Their friend runs with them, catching the action on their phone.

As the race heats up, two of the participants are neck and neck.

But the Ikea bag is the big winner, moving forward in the final moments of the wind-propelled contest.

The funny streak has racked up over 4 million views on Twitter and 14,000 likes.

It is now viral and has been widely shared by Internet users amused by the getaway.

Many Twitter users believed the clip was from the UK amid the chaos of Storm Eunice in that country over the weekend.

They were surprised to find that the video was taken when the same storm hit the Netherlands.

The Ikea bag is the big winner, moving forward in the final moments of the wind-propelled contest

Commenters reacted positively to the footage, with one writing, “Great movie; nice touch of humor. We need it. Thank you!’

Another wrote: “Fun, just gotta try this.” while another person added “love it”.

Two of those in the video were happy to have made so many people laugh online, responding to the tweet with more videos of their antics.

Ash wrote, “Glad our antics kept people entertained haha” and Jordy added, “It was good fun after all.”