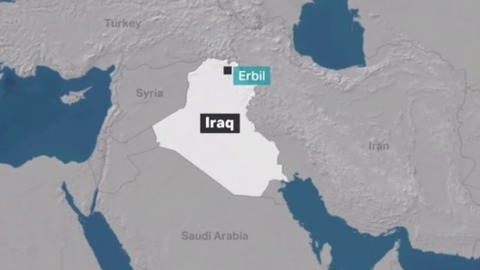 Six rockets landed near an oil refinery in the northern Iraqi city of Erbil, KRG regional counterterrorism authorities said, adding that they were launched from Nineveh province.

“Six rockets fell near the Zab river in Khabat district,” the KRG’s counterterrorism unit said in a statement on Sunday evening, without specifying the target of the attack.

The attack caused no casualties or damage, the statement said.

A fire broke out at the site but was “quickly brought under control”, one of the sources said.

The rocket attack was not immediately claimed.

Iraqi security forces said in a statement that a missile attack targeted an oil refinery, causing a fire in one of its main reservoirs which was later brought under control.

A missile also landed in the refinery’s outer fence with no casualties, the statement added.

Counterterrorism forces said the rockets were fired from the town of Bartella in neighboring Ninewa province.

Nineveh is under the administration of the federal government in Baghdad. Its capital, Mosul, was once the stronghold of the Daesh terrorist group before it was taken over by pro-government forces in 2017.

In early April, three rockets landed in Kawergosk, with no reported casualties or material damage.

April’s rocket attacks came less than a month after Iran’s Revolutionary Guards – the ideological army of the Islamic Republic – claimed responsibility for the ballistic missile fire at Erbil which they said was aimed at a ” Israeli strategic center.

KRG authorities have insisted that Israel has no sites in or near Erbil.