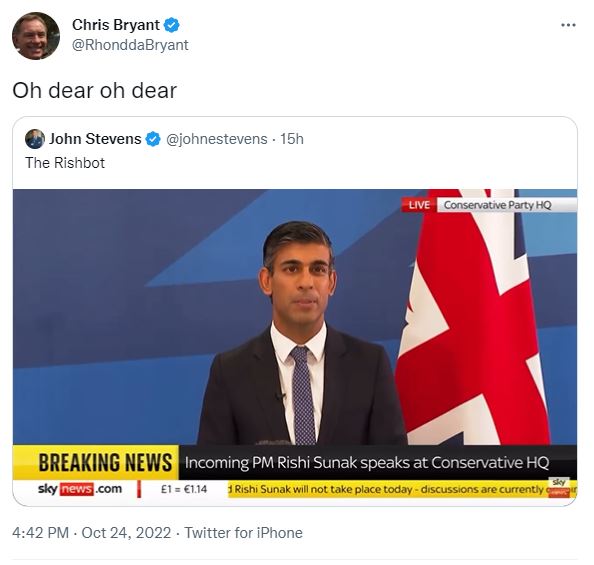 All eyes were on Rishi Sunak as he delivered his maiden speech as incoming prime minister on Monday.

And although his speech was only 90 seconds long, he still found time for an awkward pause that left some twists and drew inevitably unfavorable comparisons to his predecessor Liz Truss.

The speech was delivered shortly after winning the Conservative leadership race and was his first public comments since Truss resigned last Thursday.

After warning that the country faced a “deep economic challenge”, he concluded by saying: “I will work day in and day out to meet the needs of the British people”.

However, instead of leaving the stage, Sunak stared at the audience – expressionless – for a few seconds before finally exiting.

As of Tuesday morning, a clip of the moment shared on Twitter had been viewed more than 1.8 million times, prompting comments calling it “Rishbot”, and further digs at its wooden delivery.

He added: “I found Sunak impressive in the 2017 election, but since then his over-packed hyper-ventilation has put me off. Yesterday he was downright weird. But his biggest issues are his lack of contact/understanding commonality, its ugly economic heritage, and its reputation as a backstabber.”

Legal commentator David Banks, referring to a much-derided speech by Truss in 2014, said: ‘It’s a pork markets style of delivery – the nightmare continues’.

And i Paper editor Jane Merrick said: ‘He has to hope he’s warmed up a little better ahead of No 10 tomorrow.’

Others were less critical, with Piers Morgan describing it as a “perfect speech” that was “brief, no frills, no bullshit, no Latin phrases…and straight to the point”.

Unusual delivery is irrelevant to Sunak.

As Chancellor he was often confident and articulate when leading COVID press conferences and he pulled off a widespread phrase when he unveiled his ‘Eat Out to Help Out’ policy to support and create jobs in the hospitality industry in the summer of 2020.

And a recent poll by Savanta – although not entirely positive – found that people consider him to be “confident”, “smart” and “intelligent”.

Sunak won the Conservative leadership race by default on Monday when rival Penny Mordaunt pulled out due to insufficient support.

Boris Johnson also dropped out of the contest on Sunday, despite claiming she had enough support.

A new leader was needed after Truss stepped down on Thursday after spending just 45 days in office.

During his speech at the Conservative Party headquarters, Sunak said, “Now we need stability and unity and I will make it my top priority to bring our party and our country together.”

He said he was “humbled and honoured” to have been chosen to lead his party, adding: “It is the greatest privilege of my life, to be able to serve the party I love and to give back to the country I love. owe so much.”

He is now expected to embark on what is likely to be a series of unpopular spending cuts as he tries to tackle the UK’s cost of living crisis.