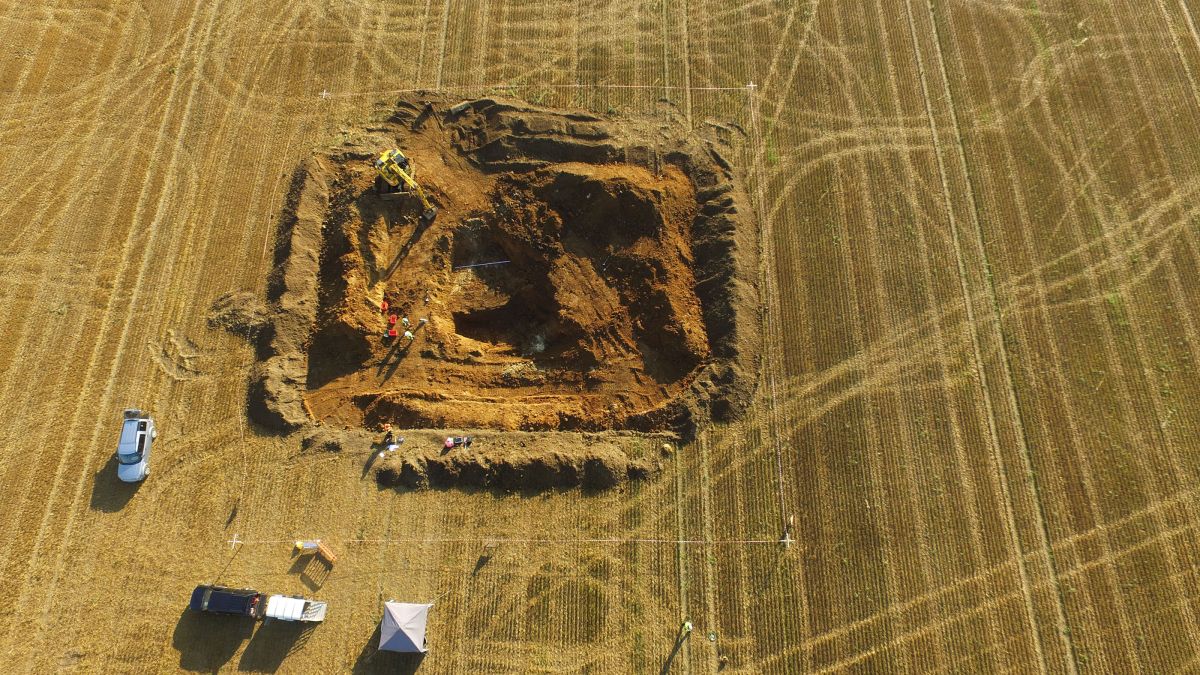 The remains of a V2 rocket fired by Nazi Germany at London during World War II were unearthed in a field in South East England, where it crashed and detonated before reaching its target .

This is the sixth major excavation of a V2 site carried out by conflict archaeologists and brothers Colin and Sean Welch, who spent more than 10 years investigating the sites of Nazi “weapons of revenge” launched into the British capital, they said.

They also searched the impact sites of dozens of V1s flying bombs, a precursor of modern cruise missiles that were launched primarily from catapults in Nazi-occupied France in 1944 and 1945.

In the latest V2 dig near Platt, a village near Maidstone, researchers – called Crater locators – recovered over 1,760 pounds (800 kilograms) of metal debris, including large fragments from the rocket combustion chamber, since the rocket explosion around midnight on February 14, 1945.

The site is now open farmland, but it was an orchard when the rocket hit. The impact was far enough away from any homes that no one was injured, but an elderly woman later said the sound of the explosion damaged her hearing, Sean Welch told Live Science.

The team spent four days in late September using a mechanical shovel and shovels to dig the bomb crater, which had been backfilled with earth although its location is known. They will now devote up to 18 months to the conservation of the objects before writing an archaeological report for the official historical archives of the county.

The team used metal detectors to locate the deepest remains of the explosion, which lay more than 4.3 meters underground, said Colin Welch.

“[Although] the rocket travels up to three and a half times the speed of sound, the detonation is not supersonic, “he said.” The rocket reaches at least 5 feet [1.5 m] into the ground before it starts to explode properly. “

The V1 flying bombs and V2 rockets were among the last “Wunderwaffen” or “miracle weapons”, which the Nazi leaders hoped to turn the tide of the war, which Germany was then losing – but they came too late .

According to Smithsonian Institute Air and Space Museum, Adolf Hitler ordered the deployment of V1s and V2s against London following the devastating Allied bombing of German cities in 1943 and 1944, and his propaganda minister Joseph Goebbels nicknamed them “Vergeltungswaffe”, or “weapons of revenge “. The first V1 hit London on June 13, 1944 and the first V2 on September 7, 1944.

Related: The rise of Hitler: how a homeless artist became a murderous tyrant

V1s flew at about the speed of a fighter jet at the time, and Royal Air Force pilots quickly learned how to shoot them down or deviate them from course. Their jet engines also made a lot of noise – they were nicknamed “buzz bombs” – so people could hear them coming and trying to take cover.

V2 rockets, however, were the first supersonic weapons and were dreaded as no one could hear them coming, and they flew too high and too fast to be intercepted. The German military launched the rockets from sites in Germany to an altitude of about 50 miles (80 kilometers); they then fell on their targets, reaching speeds of up to 3,500 mph (5,600 km / h.)

While the V2s are more sophisticated, the V1s were much cheaper to make and tended to explode at ground level, rather than after entering the ground, making them more effective weapons, said Colin Welch.

The V2 rocket attacks on London killed around 9,000 civilians and servicemen, while the two German Vergeltungswaffen killed up to 30,000 people, according to the Imperial War Museum in London.

Several V2 rockets fell short of the British capital and landed in Kent; Colin and Sean Welch believe it’s because they were launched at night when targeting was less precise. As the V2 campaign progressed, they argue, the launches could be spotted by Allied radar operators, who would then guide fighter squadrons to the location. To avoid attacks from Allied planes, the Germans started launching V2s at night when most fighters could not fly, resulting in poorer accuracy from ground crews targeting the rockets, they declared.

Some of the twisted metallic remnants of the V2 that crashed and exploded near Platt in 1944 are engraved with a three-letter code that signifies the factory in Nazi-occupied Europe where the part was made.

Until recently, historians believed that all subsequent V2s were built under the direction of German rocket specialist Wernher von Braun in underground tunnels near Nordhausen at the foot of the German Harz Mountains.

But it now appears the Nordhausen factory was just an assembly line, and the three-letter codes show the Nazis were making V2 parts in factories as far away as occupied Czechoslovakia, Sean Welch said.

Von Braun himself is a controversial figure. He claimed not to be aware of the Nazi atrocities but he was a member of the Nazi paramilitary SS (“Schutzstaffel”, meaning “protection squad”) and according to the White Sands Missile Line Museum more than 12,000 forced laborers died on its V2 production line in a single year.

But von Braun was captured by the Americans after the war and became a pioneer in the space race; in 1960 he was appointed director of NASA’s Marshall Space Flight Center, where he developed the rockets that propelled the Apollo spacecraft to the moon.

The US military in post-war Germany also captured several V2s in various stages of assembly and shipped them to the United States, where they became the basis of the nascent space program. In 1946, a modified V2 launched from White Sands Missile Range in New Mexico reached an altitude of 65 miles (105 km) and took the first photograph of Earth from space, Air & Space magazine reported.