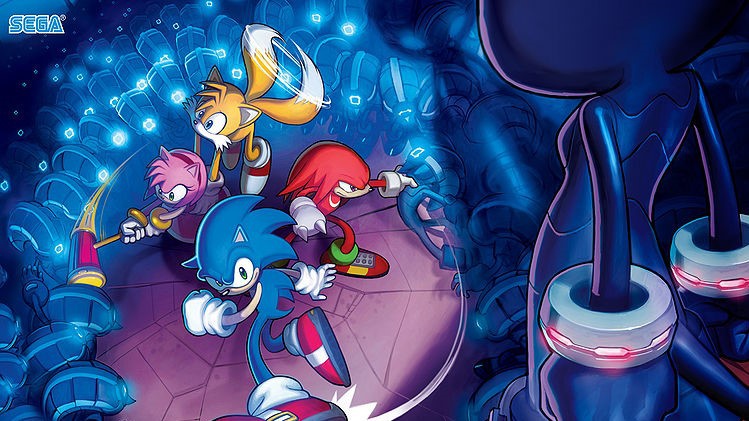 Sonic the Hedgehog is an intriguing video game mascot who is as respected as he is ridiculed by the gaming community at large. Even so, the franchise continues to roll, with new games and movie movies on the horizon.

There’s just something about the ups and downs of the Sonic franchise that we find so admirable. He’s gone through several iterations and spinoffs, much like the portly plumber rival of Nintendo’s Blue Blur.

And, just like Mario, Sonic the Hedgehog has also dabbled in the turn-based RPG genre, with Sega enlisting the help of one of Western RPG masters, Bioware, to help him out.

So, is Sonic Chronicles: The Dark Brotherhood worth remembering or is it one of the most forgotten Sonic spin-offs of all time? Let’s take a closer look.

Sonic Chronicles follows one of the worst games in the franchise, the eponymous Sonic 06. As such, the franchise was at its lowest and a revamp was needed.

Thankfully, Bioware was at an all time high, with the first Mass Effect, Star Wars: Knights of the Old Republic, and Jade Empire making waves at the time.

So this collaboration could have given the major boost that Sega should have wanted with the Sonic the Hedgehog franchise, especially since it was released on one of the most popular handhelds of all time, the Nintendo DS. .

Needless to say, Sega and Bioware haven’t exactly achieved the mass success they hoped for, but it’s not for lack of trying. Despite its flaws, Sonic Chronicles: The Dark Brotherhood is a spin-off that every fan should try at least once.

While it ditched the high-speed antics of the franchise for a slower turn-based combat system, it still allowed fans to roam the world of Sonic and outfit their parties with fan-favorite characters like Knuckles and Shadow.

The story acts as a sort of continuation and re-threading of the two Sonic Adventure games, featuring a new group of Echidnas looking to find the Chaos Emeralds. The game also uses a shady art style, fan favorite music, and the Chao Garden of Dreamcast entries.

What is a bit missing is the slowness of the fighting, which is certainly ironic. On top of that, taking a page from Mario’s RPG adventures, attacks and spells require extra button presses and quick events with the Nintendo DS touchscreen, which were finicky at best.

Sonic Chronicles: The Dark Brotherhood may not have been a game-changer, but it’s a concept worth revisiting in the future. Since its acquisition by EA, Bioware may not be available to make a return, but we have other options.

Sega themselves have stepped up their turn-based efforts in recent years, with Persona 5 arguably one of the best-received JRPGs in years. Even their flagship Yakuza series moved away from its beat’em up roots with the turn-based Yakuza: Like a Dragon.

It is therefore entirely possible for Sonic and his friends to revert to the RPG format. The social aspect of Persona 5 would also be perfect for the Blue Blur, especially for longtime fans who adore the eclectic cast of characters. Add in some plot elements from the Archie Comics adaptation and some humor from Sonic Boom, and we’re good to go.

NBA fans remember when PJ Tucker was the starting center for the Houston Rockets at 6’5: “I still can’t believe the Rockets did that to PJ Tucker.”