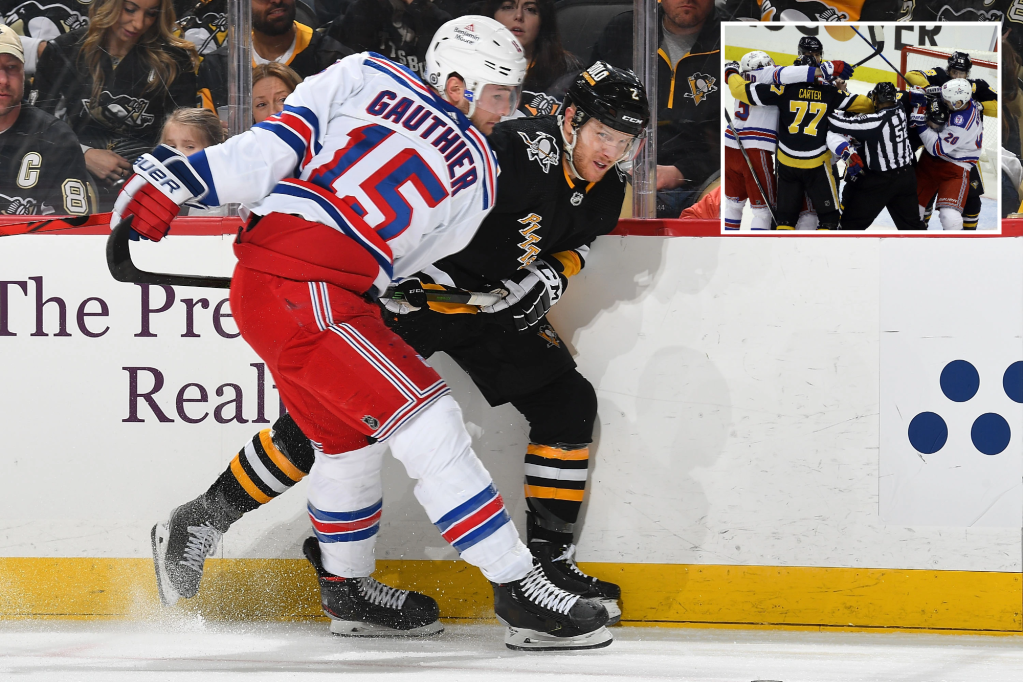 PITTSBURGH — The playoff mood is approaching.

In their first meeting of the season with the Penguins, Rangers narrowly came up short, 1-0, in a high-octane game that featured a goalie battle, a plethora of scrimmages and downright nastiness at the PPG Paints Arena Saturday.

With the win, the Penguins battled for possession of second place in the Metropolitan Division away from Rangers and snapped a three-game losing skid in the process.

After two scoreless periods, approximately 4 1/2 minutes into the final period, Rangers defenseman Ryan Lindgren was assessed a soft pick penalty against the only player on the ice who would manage to tie the game: Penguins star Sidney Crosby.

The Rangers’ penalty kill, which has been largely effective lately, couldn’t recover in time to defend a dynamic Penguins power play. Evgeny Malkin’s rocket fired at 5:09 was finally decisive.

To start the second period, Rangers and Penguins skated four-for-four after Kevin Rooney and Malkin earned equal roughing penalties late in the first 20 minutes. It was ultimately the first of three four-on-four game streaks as both teams increased their physicality.

Post Sports+ members, register ask Mollie Walker to text you the final word on Rangers and respond with your thoughts and questions. Not yet a Sports+ member? Try it now.

The two teams combined for eight penalties in the first two periods, earning four each, on their way to 10 in total for the game. Although there were no-calls and questionable make-up calls from the officials, the hostility between the two clubs was a byproduct of the closeness of the game.

Half of the penalties were for brutality after the whistle, which seemed to become usual halfway through the middle frame.

Igor Shesterkin froze the Penguins for much of the game, as he often does, stopping 25 of the 26 shots he faced in the loss. The Russian keeper got a hard shot from Crosby on the doorstep in the second period, which convinced the Pittsburgh crowd that it would be a goal.

The Rangers doubled the Penguins’ shooting total, 12-6, in a first period that grew increasingly choppy as it progressed. Pittsburgh went without a shot for more than seven minutes, allowing the Rangers to spend much of the first 20 minutes in the offensive zone.

If the regular season ended today, the Penguins would be Rangers’ first-round game. If this first meeting was any indication of what it could be, it would be quite a series.