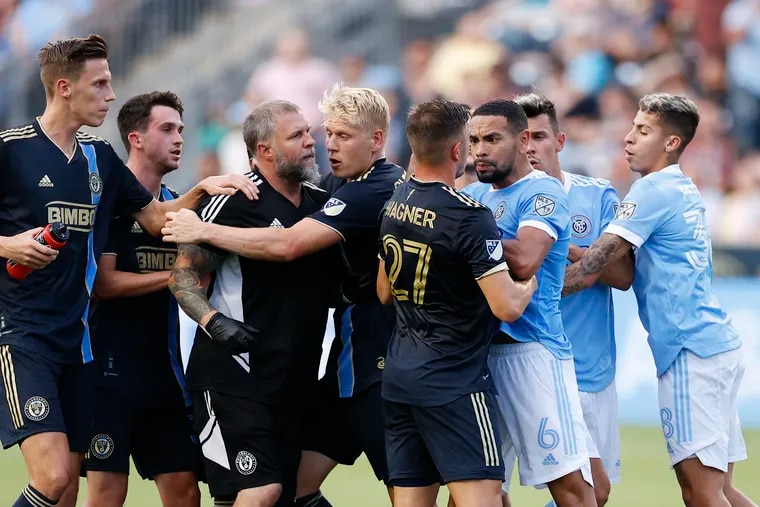 Major League Soccer’s Disciplinary Committee issued a series of penalties on Tuesday for the brawl that broke out at the end of the Union’s 2-1 win over New York City FC on Sunday at Subaru Park.

Top of the list is an additional match suspension and undisclosed fine for Union sports coach Paul Rushing, who was at the center of the brawl. Rushing entered the pitch in the 76th minute, after referee Armando Villarreal stopped the game with a potential head injury to Union’s Julián Carranza.

A few New York players thought Carranza was embellishing, notably Nicolás Acevedo. He confronted Rushing, who pushed Acevedo away twice and offered some choice words. Acevedo then gestured towards Rushing, Valentín Castellanos gave Rushing a push, and the smash erupted from there.

At one point, Union’s Jakob Glesnes had to hold Rushing back with a bear hug.

Eventually, Rushing was able to attend Carranza and then leave the field. As he walked away, Villarreal showed him a red card. Rushing received a standing ovation from the crowd as he made his way down the tunnel and quickly went viral on social media.

Rushing will miss Union games in Chicago on Wednesday (8 p.m., PHL17) and Columbus on Sunday (7:30 p.m., PHL17). His first game back on the bench will be Union’s home game against DC United on July 8, which happens to be nationally televised (7:30 p.m., ESPN, ESPN Deportes).

No players were suspended, but many were fined, the amount of which was not disclosed. The list:

Coincidentally — or maybe not at this point — both teams’ first violations came during the Union’s visit to NYCFC in March, when they won at Yankee Stadium for the first time.

Damage to the ozone layer from rocket launches?