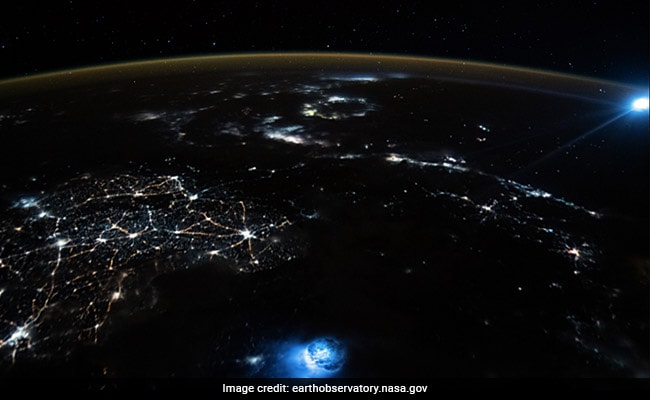 The image was captured last year in October by an astronaut aboard the ISS.

Two strange drops of shimmering blue light in Earth’s atmosphere have been captured by an astronaut aboard the International Space Station (ISS). NASA Earth Observatory shared the photo earlier this month and informed that it was taken at night as the ISS passed over Southeast Asia.

The image contains two dazzling white-blue orbs of light – one above the Gulf of Thailand and the other far on the horizon near the South China Sea. NASA explained that these two drops of light are actually the result of two unrelated natural phenomena that happened at the same time.

According to the US space agency, the first drop of light, visible at the bottom of the image, is a huge lightning strike somewhere in the Gulf of Thailand. Usually these flashes are cloud covered and not visible from the space station, however, in this image the impact was visible through a hole in the clouds.

The second drop, on the other hand, which can be seen in the upper right of the image, is light from the moon seen through the Earth’s atmosphere. According Newsweekthe scattering effect of the atmosphere, which is also the reason the daytime sky appears blue, caused the moonlight to appear the same color as the electrical storm occurring below.

The small lights to the left of the moon are fishing fleets illuminating the South China Sea.

“The Vietnamese coast and Thailand anchor the center of the image… In the background of the photo, the circular shape of the island of Hainan, the southernmost province of China, is emphasized by the lights of its coastal cities,” NASA explained.

The image was captured last year in October by an anonymous Expedition 66 crew member.

Meanwhile, speaking of stunning space images, earlier this week NASA shared a mesmerizing image of the emblematic “Pillars of Creation”. The image showed a view of three looming towers made of interstellar dust and gas that sometimes appear semi-transparent in the near infrared.

The photo highlighted the presence and thickness of interstellar dust surrounding these pillars. The iconic creation takes place in the vast Eagle Nebula, located 6,500 light-years away.