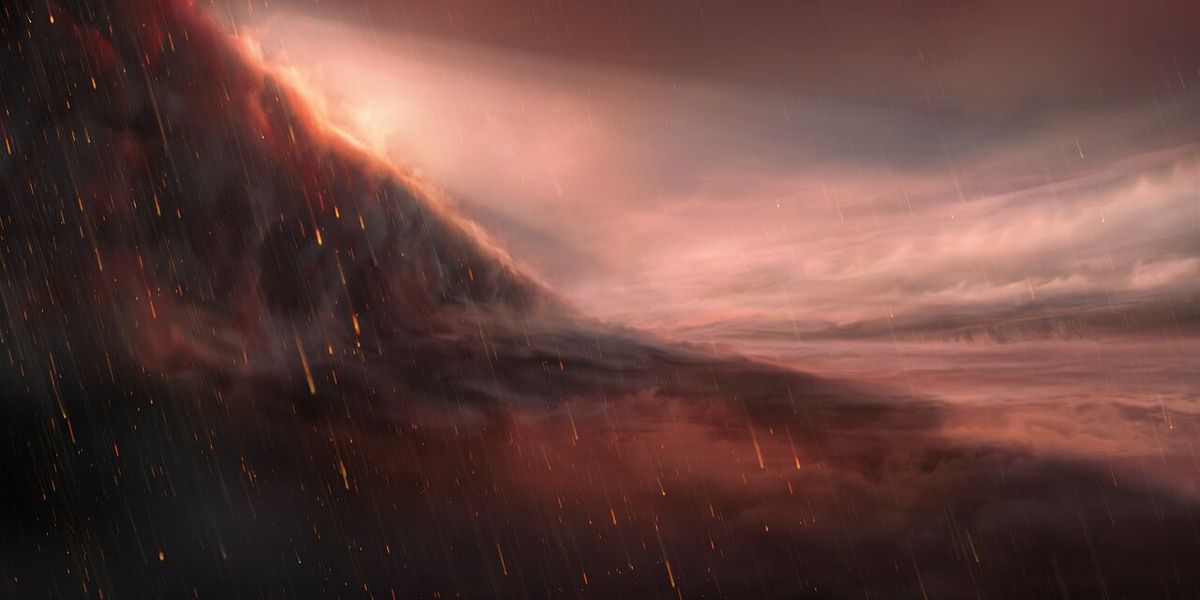 JWST will search for clouds of vaporized gems on exoplanets

Astronomers are hoping for cloudy skies as the James Webb Space Telescope (JWST or Webb) turns its attention to exoplanetary atmospheres laden with vaporized rocks and crystals such as corundum and perovskite, which form gemstones on Earth.

The hot Jupiters, which are gas giants which orbit extremely close to their stars, become so hot that rocky elements, minerals and metals can exist as vapor in their atmospheres, scorched by temperatures of up to 3,600 degrees Fahrenheit (2,000 degrees Celsius).

“On Earth, many of these minerals are gems,” said Tiffany Kataria, exoplanetary scientist at NASA’s Jet Propulsion Laboratory. statement. “A geologist would study them like rocks on Earth, but they can form clouds on exoplanets. That’s pretty wild.”

Related: These 10 Super Extreme Exoplanets Are Out Of This World

Many hot Jupiters are tidally locked, meaning they always show the same face to their star, which makes their daytime sides incredibly hot. In the case of WASP-76b, the day side reaches a scorching 4,000 degrees F (2,200 degrees C). The night side of the planet is “only” 2,700 degrees F (1,500 degrees C), but it’s cold enough for iron to condense and precipitate out as a rain of molten metal.

Previously, these elements and minerals have been detected as a diffuse presence in exoplanetary atmospheres. Now, JWST’s high-resolution vision will be able to directly distinguish these minerals as clouds, by measuring their composition spectroscopically.

“Clouds tell us a lot about the chemistry of the atmosphere,” Kataria said. “It then becomes a question of how the clouds formed, and how the system as a whole formed and evolved.”

For example, on WASP-19b, titanium oxide absorbs heat, causing a temperature inversion whereby the planet’s upper atmosphere is warmer than the lower atmosphere, where the reverse would normally be expected.

JWST has observed alien atmospheres before, detecting water clouds in the exoplanet’s atmosphere WASP-96b, where scientists previously thought there were no clouds at all. During its first year of observations, the JWST is also studying a host of other exoplanet atmospheres.

Kataria herself is involved in a number of projects, including partnering with MIT’s Thomas Mikal-Evans to use JWST’s near-infrared spectrometer (NIRSpec) to characterize the atmosphere of ultra-hot Jupiter. WASP-121bwhich is 850 light years from Earth and was the first exoplanet to have a aqueous stratosphere.

Another of Kataria’s projects with JWST involves observing hot Jupiter HD 80606b, which is 290 light-years from Earth and is in a very eccentric orbit that orbits its star, bringing it closer to 2.8 million. miles (4.5 million km) and taking it up to 81 miles (131 million km). As a result, HD 80606b experiences “instantaneous heating” when its temperature drops from 930 degrees F (500 degrees C) to 2,200 degrees F (1,200 degrees C) within hours as it approaches its star. The effect on the planet’s weather is staggering, with computer models predicting severe storms and raging winds at 15 times the speed of sound; Kataria hopes that JWST can observe these events.

Finally, Kataria is co-leading a project with Brian Kilpatrick of the Space Telescope Science Institute in Baltimore to create 3D “eclipse maps” of exoplanet HD 189733b with JWST’s Mid-Infrared Instrument (MIRI). Eclipse charts are created when a planet moves behind its star. By subtracting the planet’s faint light signature from the starlight when the planet enters an eclipse, scientists can isolate the planet’s light and map the temperature of its atmosphere. Kataria and Kilpatrick hope the technique will allow them to determine the most accurate circulation model yet for an exoplanet’s atmosphere.

This exoplanet, located 64.5 light years from Earth, was discovered in 2005 and has since become one of the best-studied hot Jupiters. Several other projects will also observe HD 189733b with JWST, including an effort to perform an in-depth study of the molecular composition of the planet’s atmosphere and determine the composition of any clouds present, as well as an effort to search for vaporized mineral aerosols that form clouds in the atmosphere of HD 189733b.

The atmospheres of smaller, rockier exoplanets will also be closely examined by the JWST. The researchers will measure the composition of the atmosphere on 55 Cancri e, which is a super-Earth with eight times the mass of our planet; scientists also hope to determine if it is hot enough to rain lava. And the seven worlds of TRAPPIST-1 The system will also come under scrutiny, with the JWST examining every planet in the system for an atmosphere.

Astronomers will pay particular attention to TRAPPIST-1e, which is the most Earth-like planet in the neighborhood. If it is habitable, then evidence of this can be found in its atmosphere, including its clouds.

“Clouds are an important feature on Earth, to regulate temperature,” Kataria said. “They are an important consideration for Earth’s climate. It stands to reason that clouds could also be a vital part of the atmosphere of a habitable exoplanet. The more we understand about how clouds form in general – as they have on Earth and other solar planets – the more we understand how clouds evolved in more exotic environments.”