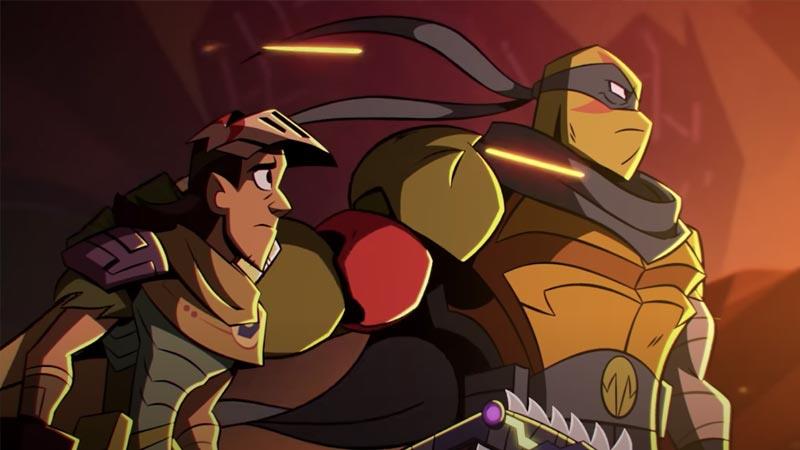 Grab a slice and enjoy the first four minutes of RISE OF THE TEENAGE MUTANT NINJA TURTLES: THE MOVIE

The Rise of the Teenage Mutant Ninja Turtles: The Movie debuts this week on Netflix, but you can enjoy the first four minutes of the animated feature right now.

We’re just hours away from the Netflix premiere of The Rise of the Teenage Mutant Ninja Turtles: The Movie, but Netflix gives us a taste. The streaming service has shared the first four minutes of the upcoming animated film, which you can enjoy below.

Rise of the Teenage Mutant NInja Turtles: The Movie is actually a continuation of the series which ran for two seasons (39 episodes) from July 2018 to August 2020. The film follows Leonardo’s rise as the leader of the Turtles to help save the world from the Krang.

Over the first four minutes, we’re treated to some stunning 2D animated action as we’re taken to a future in which the Krang threaten to take over the world. But as the recent trailer alludes to, Casey Jones is sent back in time to warn the younger version of the Turtles of the impending alien invasion.

Faced with almost certain defeat, we see a badly injured Leonardo turn to the greatest weapon a ninja has: hope. With the help of Michaelangelo, a badass mystical warrior, the Turtles open a time gateway to send Casey Jones back in time with the hope that he can find the key that originally opened the mystical door that has allowed the Krang to come to Earth for the first time. We still don’t know exactly who the people responsible for stealing this key and summoning the Krang are, but I’m sure we’ll find out.

Traveling from the future, Casey Jones has a mission: find the key that stops the Krang to save the world! But he will need the help of the cowabunga team in this epic adventure based on the “Rise of the Teenage Mutant Ninja Turtles” series.

For the first four minutes of the movie, there’s a lot of action in this clip. And a surprising amount of emotion too. Watching future versions of Michelangelo and Leonardo sacrifice their lives for the greater good – even though we know we’ll see past versions of themselves – was quite an emotional moment.

The original voice cast from the animated series returns for their roles, including Ben Schwartz (Sonic the Hedgehog) as Leonardo, Omar Benson Miller as Raphael, Brandon Mychal Smith as Michelangelo, Josh Brener as Donatello, Kat Graham as April O’Neil , and Eric Bauza as Splinter. It was also recently revealed that Haley Joel Osment is the voice of Casey Jones.

Rise of the Teenage Mutant NInja Turtles: The Movie hits Netflix on August 5. Make sure the pizza delivery is on speed dial.