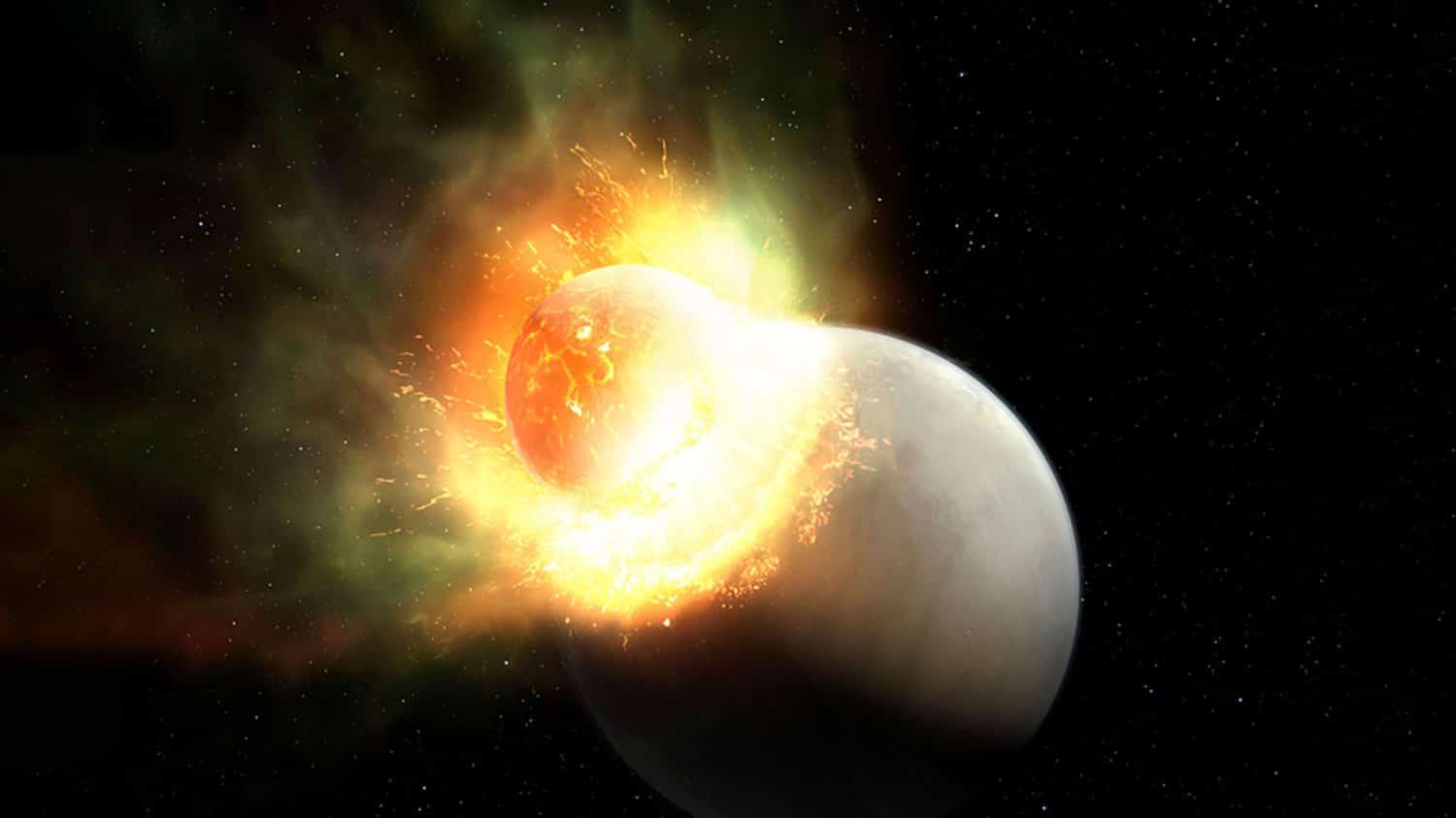 Young planets sometimes suffer giant impacts. Even in our solar system, the Earth and the Moon are considered products of this type of giant impact.

Such impacts have been difficult to observe around other stars.

Now, astronomers have offered proof of such a giant impact in a nearby star system, just 95 light years from Earth. The collision is likely to occur between an alien planet, an Earth-sized planet, and a smaller impactor.

The team speculated that the impact occurred around 200,000 years ago, at speeds of 10 kilometers per second, or more than 22,000 miles per hour. Notably, the impact removes part of the atmosphere of the larger planet.

The team includes astronomers from MIT, the National University of Ireland in Galway, the University of Cambridge and elsewhere. The event occurred near the star HD 172555 which is approximately 23 million years old.

Astronomers have detected evidence of the event in the gas and dust observed around the star.

Lead author Tajana Schneiderman, a graduate student in the Department of Earth, Atmospheric, and Planetary Sciences at MIT, said: â€œThis is the first time that we have detected this phenomenon, that of a protoplanetary atmosphere stripped during a giant impact. Everyone is interested in seeing a giant impact because we expect them to be common, but we don’t have evidence in many systems for it. We now have additional insight into these dynamics.

Lead author Tajana Schneiderman, a graduate student in the Department of Earth, Atmospheric, and Planetary Sciences at MIT, said: â€œBecause of these two factors, the HD 172555 was thought to be this strange system. “

The team wondered what the gas might reveal about the system’s impact history. To observe, they collected data from ALMA. They looked for carbon monoxide around HD 172555.

After careful reanalysis, they detected carbon monoxide around the star. They also observed that the gas circled in large quantities, surprisingly close to the star, at around ten astronomical units.

Schneiderman said, “The presence of carbon monoxide so close requires some explanation.”

One possible scenario includes the emergence of gas from the debris of a newly formed star and a scenario in which a close belt of icy asteroids produced the gas. Another scenario is that the gas was emitted by many icy comets from a distant asteroid belt, similar to our Kuiper belt. But the data didn’t quite fit that scenario either. The last scenario considered by the team was that the gas was a holdover from a giant impact.

Schneiderman said, â€œOf all the scenarios, this is the only one that can explain all the characteristics of the data. In systems this age, we expect there to be giant impacts, and we expect giant impacts to be quite common. The timescales get better, the age gets better, and the morphological and compositional constraints get better. The only plausible process that could produce carbon monoxide in this system in this context is a giant impact. “

Based on the abundance of the gas, it is assumed that the impact was likely massive enough to blow a planet’s atmosphere.

Schneiderman said, â€œNow there is a possibility of future work beyond this system. We show that if you find carbon monoxide in a location and morphology compatible with giant impact, it offers a new avenue for researching giant impacts and understanding how debris behaves afterward. “

Hilke Schlichting, professor of Earth, Planetary and Space Sciences at the University of California Los Angeles, who was not involved in the research, noted, â€œWhat is particularly exciting about this work, in my opinion, is that it demonstrates the importance of atmospheric loss through giant impacts. It also opens up the possibility of studying the composition of the atmospheres of extrasolar planets undergoing giant impacts, which could ultimately help shed light on the atmospheric conditions of terrestrial planets during their giant impact phase.

The hit game is finally coming to the big screen