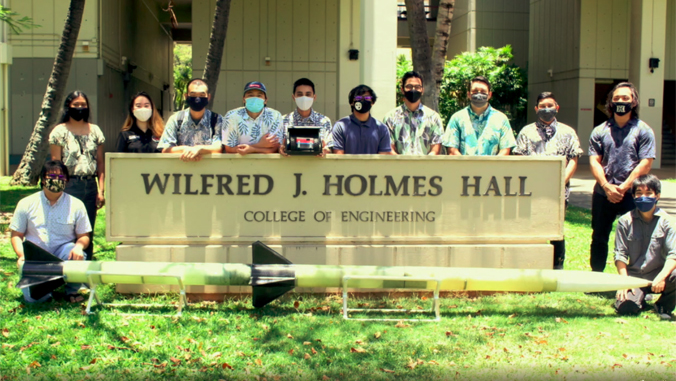 
On your marks, get set, take off!

Members of the University of Hawaii at Mānoa Hōkūlele team are heading to Mojave, Calif., to launch their 15-foot rocket and payload at a national competition. The project of College of Engineering students has been accepted into the Amateur rocket friends (FAR) 1030 Competition on June 5.

Students will launch their rocket called Kuamoʻo (Milky Way) in the 30,000-foot competition category, a cruising altitude for some commercial aircraft. Besides the altitude requirement, their goals are to launch the rocket with live video, deploy a rover vehicle on landing, and recover all components in a reusable state. Team Hōkūlele and other competing university and amateur teams will launch their rockets from the FAR rocket range near Edwards Air Force Base.

Blake yamamoto, senior manager of the team’s design project, said the project was the culmination of two years of work since last year’s team were unable to compete due to the pandemic of COVID-19.

“It’s really exciting. I still have contact with some of the old team members so even they’re really excited to see this thing fly,” Yamamoto said.

Kuamoʻo is Team Hōkūlele’s first two-stage rocket / engine, established in 2019. The rocket is designed to reach a height of at least 30,000 feet and safely protect all of its components from takeoff to touchdown. The team also created a radio controlled rover capable of traveling a distance of at least 10 feet after touchdown and necessary to ensure that the rover and its deployment system are durable enough to survive any sustained impact.

Aiden Guzman is the primary responsible for the design team’s propulsion and recovery subsystem. Its task was to decide which engines will be used and to run the simulations to ensure that the rocket will fly and descend safely to and from an altitude of 30,000 feet.

“Since taking a leadership role, it has helped me gain experience giving tasks to others, coordinating test / work days with large groups of people, integrating each rocket system ensuring that none of them interfere with each other and acquire resources, ”Guzman says. “Before this project, too, I was very shy, but now I’m very comfortable asking a lot of questions. Even if you decide not to go into the aerospace business, this position will give anyone the experience they need to become a project manager for any system. 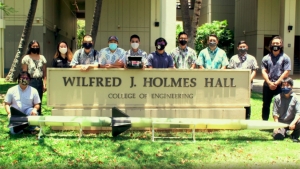 Team Hōkūlele is part of EUH Aerospace technologies, one of more than a dozen vertically integrated projects or VIPs offered to students of EUH Mānoa. VIPs are specially designed to include faculty mentors, graduate research students and undergraduates, from freshmen to seniors. The more experienced members mentor the new members, passing on their knowledge and expertise, and the process is repeated every year.

“The VIP team members all work under or alongside members of the senior design team, who serve as subsystem leaders, ”said Lea Toma, VIP director. “The result is a kind of pipeline that helps the VIP the team gains experience before its final year, which helps ensure the sustainability and success of the team, as knowledge and skills can be transferred easily. “

Two members of the current squad, including Toma, traveled with the 2019 squad to compete in the Spaceport America Cup competition in New Mexico. The students successfully launched their Kahekili rocket with two experimental payloads. Toma said this year’s squad is looking to build on the foundation started by the team’s very first competition in 2019.

The Hōkūlele team received approximately $ 19,500 in funding and support from several organizations, including the College of Engineering, Council of Engineers of the University of Hawaii, RM Towill Corporation, Fiberglass Hawaii, Pacific Instruments, ʻIolani School, Coffman Engineers, Hawaiian Dredging, and Universal Manufacturers. Pacific Air Cargo also offered to transport the rocket from Hawaii in California and back.

This program is an example of EUH Mānoa’s objectives of Research Excellence: Advancing the Business of Research and Creative Work (PDF) and Improve student success (PDF), two of the four objectives identified in the Strategic plan 2015–25 (PDF), updated in December 2020.