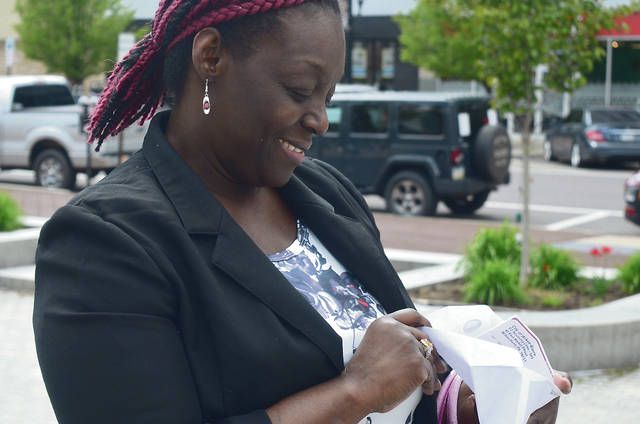 WILKES-BARRE – The first check handed out Thursday by city officials to struggling restaurants during the coronavirus shutdown was in good hands.

Beverly Yencha picked it up for her son John, owner of the Elmer Sudds bar and restaurant on East Northampton Street.

“I think it’s great,” Yencha said with an envelope in hand, the first of 21 companies expected to receive $ 141,000 in funds that were mostly distributed in the public arena. As the company’s accountant, Yencha knew how much it hurt.

No longer able to serve customers at the bar or tables due to the statewide shutdown ordered by Governor Tom Wolf in March, some have closed. In others, only take-out or delivery services fell.

Mayor George Brown, who greeted Yencha with a nudge since handshakes, hugs and high fives were restricted as part of the social distancing measures in place to stop the spread of COVID-19, said instructed his administration to find a way to help local, non-franchised restaurants in town. With the approval of the State Department of Community and Economic Development, the city redirected a program with more than $ 300,000 in dormant funds so that Yencha and other homeowners could apply for a loan, up to $ 7,500 without interest for one year. The borrower has to repay the principal loan after one year.

“It’s not about happiness. It’s a matter of survival, ”said the owner of Magda’s Pizza and Deli.

He faces the loss of $ 17,000 in restaurant income due to the canceled graduation parties. “It’s my prime time, June and July,” Magda said.

Anne Libby of Chacko’s Family Bowling Center in Northern Pennsylvania appreciated the city’s help. The tracks were closed, but not the restaurant. “We’re open for take out,” Libby said.

Sal Deluca and Val Sartor couldn’t even do much at the MVD Restaurant and Bar on Parrish Street. They had been open for a few years and closed for renovations, Deluca said. “We were about to open when the pandemic hit,” Deluca said.

“It’s been slow,” Hartman said, describing the state of affairs among the owners.

Mayor Brown predicted that 19 of the 21 recipients would collect their checks. The two that were unable to do so would be hand-delivered to their businesses, he said.

The program was just announced last week and Brown was happy with the response. He encouraged others to apply for loans and referred them to the guidelines and applications listed on the city’s website, www.wilkes-barre.city/restaurantemergencyreliefloanprogram.