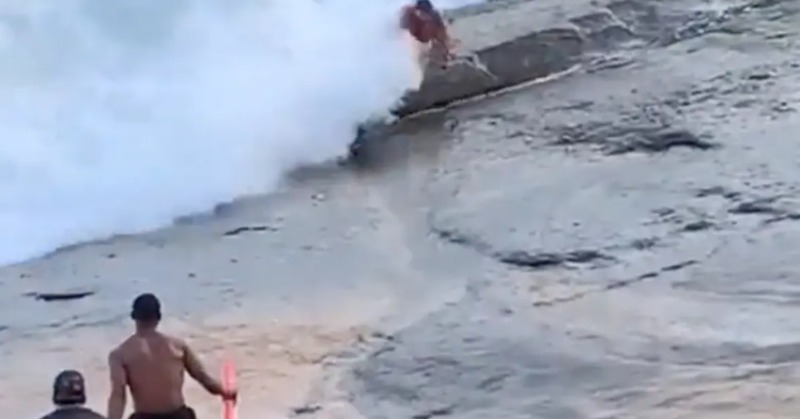 A bodyboarder, identified as Renan Souza, is hailed as a hero after saving the life of a rescuer on Good Friday in São Conrado. A video of the same has gone viral.

The injured rescuer was seen trying to hold on to the rocks but the waves carried him away. As he continued to be swept away by the waves, onlookers shouted and cheered Mr Souza and another person who tried to help the lifeguard.

The bodyboarder had participated in the Brazilian bodyboard circuit competition but had to re-enter the waves to attempt the rescue mission.

“Surfing here in the area I’ve seen similar things before, every time I’ve seen it I’ve helped by getting people out of the sea, taking them to a shallower area… but nothing like this on Friday,” he told O Globo. (in Portuguese).

“I was really scared for my life there, the sea was very rough and the stones there didn’t help. Everything was very complicated and hopeless”.

At the end of it, the injured rescuer was removed from Sao Conrado using a helicopter. In the interview, Souza mentioned, however, that he went ahead to save the rescuer without thinking twice.

“I was very nervous, I felt like I was watching him die in front of me and refusing to do anything,” said the bodyboarder. “When I realized it, I was already entering the water, everything was going very fast. I recognized him from the beach, we talk to each other from time to time, people call him Mustache and thank God he was fine”.

Although the injured rescuer was taken to the fire department hospital, the bodyboarder remained on the beach. The rescuer had wounds on his body from contact with the stones. His condition has not yet been disclosed.

The Brazilian bodyboard circuit 2022 (which is a surfing competition) started this week. The first stage has a prize pool of R$35,000.