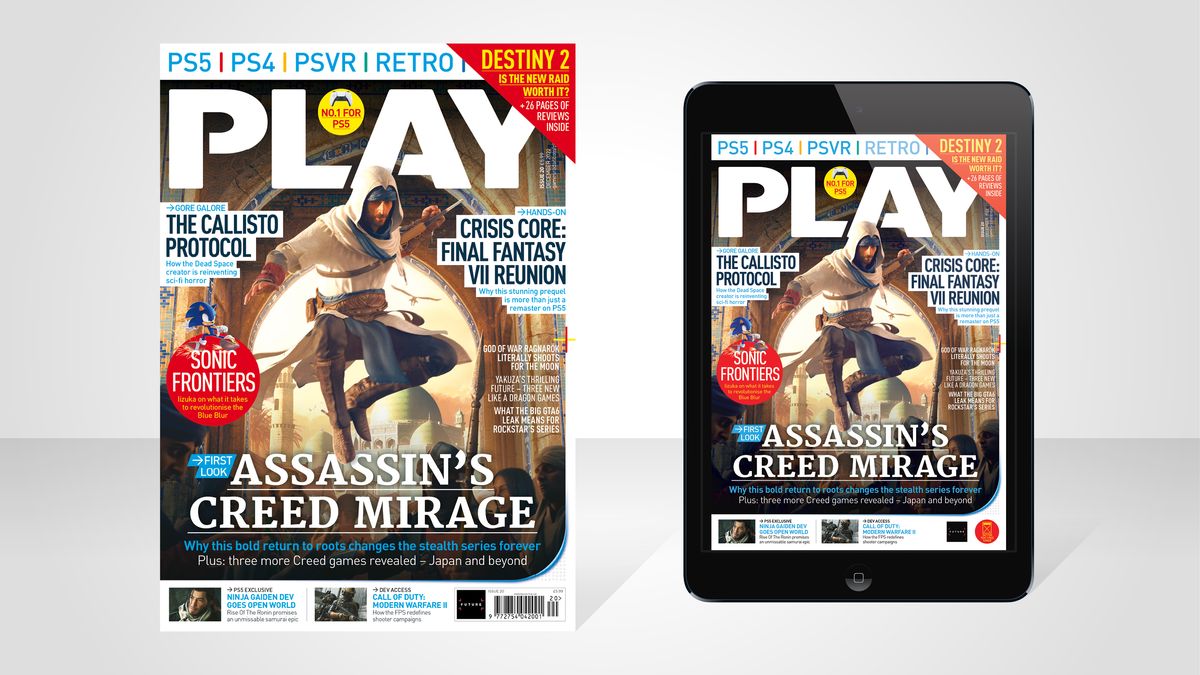 Assassin’s Creed Mirage jumps on the cover of PLAY

PLAY #20 is out now, and it marks a defining moment for Assassin’s Creed heads, thanks to a flurry of exciting announcements celebrating the series’ past and future. We’ve got plenty more inside, we’re looking at games not yet coming in 2022, and a preview of what’s to come next year.

Subscribe to PLAY Magazine here to save on the cover price, get exclusive covers, and have them delivered to your door or device every month.

We take a look at everything on the horizon for Assassin’s Creed, including the long-awaited open world title in Japan. But it’s Assassin’s Creed Mirage that steals the show, returning to the “urban playground” style of previous games and bringing it into the new. Even though it celebrates the legacy of the series, it still brings that action stealth, becoming something new.

Our preview section kicks off with The Callisto Protocol, a spooky space horror that nonetheless feels like a breath of fresh air, pushing the genre forward while other franchises are still playing it safe with remakes. We’ll also be working with Steins;Gate’s successor, Anonymous;Code, Crisis Core: Final Fantasy 7 Reunion, and chatting with Star Ocean’s famed new screenwriter.

Speaking of, well, speaking, we also sat down to chat with longtime Sonic The Hedgehog project lead Takashi Iizuka. Along with discussing the shift in direction with Sonic Frontiers towards the open-world style “open area” approach, he also tells us about the introduction of Sonic in 3D the first time around. It’s a fascinating insight into how blue blur has reinvented itself time and time again.

As you’d expect, God Of War Ragnarok leads Insider as we take a closer look at the upcoming brawls for Kratos and his son, as well as the realms they’ll travel to and how combat will evolve.

We also dig deeper into Yakuza’s renaming as “Like A Dragon” and think about what the three newly announced games could mean for the future of the series. Plus, a developer interview with Infinity Ward about Call Of Duty Modern Warfare 2’s bold new campaign, hands-on with the first new third-person Resident Evil campaign in years, GTA leaks, and more.

Three sports games (including the FIFA Finals), tons of JRPGs, and a surprisingly satisfying soul in Steelrising – this month’s reviews section is stacked. Plus we’re introducing ‘Extended PLAY’, where we dive unrated into the latest updates and revisits – this month we dive into Destiny 2’s King’s Fall raid revamp, Phantasy Star Online’s PS4 launch 2: New Genesis, and why Call Of Duty: Advanced Warfare always feels inventive.

We return to Ivalice to re-examine why Final Fantasy XII was such an odd duck and still feels so unique all these years. Plus, we investigate the Making Of Hogs Of War and tip our hats to the very first Ratchet & Clank as it turns 20 (!). For PlayStation fans old and new, PLAY has something for everyone.

If you want to be one of them, why not subscribe to PLAY Magazine? For fantastic access and insightful commentary on all the latest PS5, PS4 and PSVR games, there’s no better way to stay up to date – plus, we deliver to your door (or device) every month, with exclusive subscriber coverages. Plus, the subscription saves you a lot of money while directly supporting the magazine. We can’t do what we do without your support!

You can subscribe to the print edition, the digital version or save even more with the print/digital pack – whatever you choose, you’ll receive an unprecedented amount of dedicated PlayStation coverage each month.