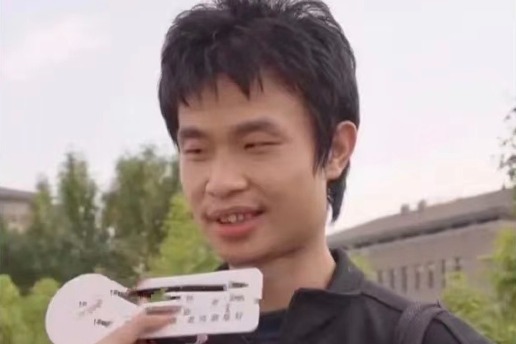 
Holding a large bottle of water and a bag of steamed buns, uncombed hair and a somewhat clumsy manner of speaking, Wei Dongyi does not look like a typical college professor.

Wei, an assistant professor in the School of Mathematical Sciences at Peking University, recently became an online sensation after internet users discovered that the somewhat shy and unsophisticated man had an extraordinary talent for mathematics.

In a viral video, Wei was asked to encourage high school graduates taking the national college entrance exam, or gaokao. He simply replied, “Welcome to Peking University. I don’t know what else to say.

Wei said he was a teacher at the university and enrolled in 2010 without taking the gaokao because he did well in high school math competitions.

After the clip was widely viewed, more of his math talent and accomplishments were discovered.

He graduated from PKU with a bachelor’s degree in mathematics in 2014 and a doctorate in the same discipline in 2018. Mathematics subject at PKU has been ranked highest of all Chinese universities in the latest world ranking of academic subjects, released by the Shanghai -Ranking consultancy in May.

Zhang Yonghua, a math teacher at the old Wei High School, believes Wei is a math genius who is a gifted university researcher. He often found better ways to solve math problems than his teachers, Zhang said.

Zhang told Paper.cn that Wei had already turned down an offer from Harvard to study for a doctorate, even after the university said it would provide him with an interpreter.

Wei’s cousin, Wei Jingzhou, told the Zhejiang Daily that Wei Dongyi leads a frugal life, cares a lot about the environment, and is not particularly careful about what he eats and wears.

Carrying filled water bottles and steamed buns is common for Wei Dongyi; and he spends less than 300 yuan ($ 47) a month in Beijing, although he has no shortage of money, Wei Jingzhou said.

Wei Dongyi rarely watches TV, does not use social media platforms such as WeChat and Weibo, and enjoys listening to the radio, the cousin said.

“His favorite activity is solving math problems, and he’s very interested if you talk to him about math.”

Wei Dongyi grew up in Jinan, Shandong Province. Her father, who passed away several years ago, was a math teacher at Shandong Jianzhu University and her mother is an English teacher at the same university.

The Beijing International Mathematical Research Center at Peking University recently said in a statement that in addition to his success in mathematics competitions, Wei’s research results have been published by many world-renowned mathematics journals. . “Mathematical research requires a calm environment, and we hope that all sectors can work together to create an academic environment conducive to young researchers to concentrate on their work,” the statement said.

Chinese social media platforms have been inundated with praise and admiration for Wei. Netizens have said that talents like Wei are giving young people new idols that are an alternative to pop stars.

Qi Chen, an undergraduate student at Tsinghua University, said that although there are many talented people in different fields at top universities like Tsinghua and PKU, it is rare for a person to get wide recognition. . “Compared to pop stars, which students can talk about to pass the time, academic idols like Wei are people we deeply admire and aspire to be,” he said.

Zhou Moyan, an undergraduate student at Renmin University of China in Beijing, said she admires Wei for his simple lifestyle and rich inner world. “He’s very focused on what he is passionate about, which inspires me to work hard in my studies and become more professional in my major,” said the 22-year-old.